I just love this image, of a mythical single plant that bears all our vegetables. It’s not my creation — it’s Barbara Kingsolver’s, from her farm-memoir Animal, Vegetable, Miracle. The intention was to show where all our vegetables come from, botanically-speaking. From this one image, you can start to see how and why some of our vegetables take so long to be ready to harvest.

“The vegetables we eat may be leaves, buds, fruits, or seeds, but each comes to us from some point along this same continuum, the code all annual plants must live by. No variations are allowed. They can’t set fruit, for example, before they bloom. As obvious as this may seem, it’s easy enough to forget in a supermarket culture where the plant stages constantly present themselves in random order.” 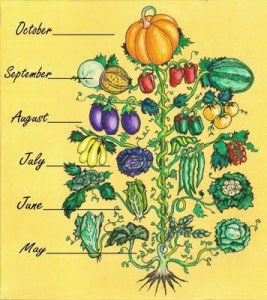 “Take a minute to study this creation – an imaginary plant that bears over the course of one growing season a cornucopia of all the different vegetable products we can harvest. We’ll call it a vegetannual. Picture its life passing before your eyes like a time-lapse film: first, in the cool early spring, shoots poke up out of the ground. Small leaves appear, then bigger leaves.  As the plant grows up into the sunshine and the days grow longer, flower buds will appear, followed by small green fruits. Under midsummer’s warm sun, the fruits grow larger, riper, and more colorful. As days shorten into the autumn, these mature into hard-shelled fruits with appreciable seeds inside. Finally, as the days grow cool, the vegetannual may hoard the sugars its leaves have made, pulling them down into a storage unit of some kind: a tuber, bulb, or root. So goes the year.” (Barbara Kingsolver, Animal, Vegetable, Miracle).

It’s easy to remember that large, tough-skinned squashes are fall harvests, or that green shoots like ramps are the first to appear in the spring. But the time of year is also a clue to flavor, which takes time to develop. Spring turnips are soft and tender, where summer turnips are much spicier. Carrots and parsnips and brussels sprouts can be harvested in late summer, but the sweetness really increases when the weather turns cold, so harvesting after the first frost will greatly reward you.

Though these dates below aren’t fixed, they’re a good guide as to what you can expect to find available freshly harvested from local producers. Much of the spring veg like spinach and lettuce gets antsy when the weather turns, bolting and producing flowers and seeds, not to be replanted again until cooler weather.

Summer vegetables like broccoli, green beens, peppers, eggplants and tomatoes tend to produce from the same plants throughout the summer, as long as they’re getting what they need. Paste tomato varieties like San Marzano and Roma will produce all their tomatoes at once, but the rest will keep on going until it just gets too cold. Snow peas and cucumbers do ok until the real summer heat arrives; they can both have short seasons, depending on the weather.

Fall roots offer a nice sweet starchiness that we come to expect in our Thanksgiving and other autumn meals. Many of the spring vegetables return as well, once the heat of the day/night backs off.

So stay tuned for those melons and squash, carrots and parsnips and brussels sprouts, and the return of radishes! Follow your farmers on facebook for more information about what they’re growing and harvesting right now. Remember the list of local farms on the tab at the top of our page (or click this link).

And keep in mind that these farmers offer their produce for sale in other local venues besides the Bloomington Farmer’s Market: Green Top Grocery, Common Ground, and others!